San Sebastian is a hidden gem in the North of Spain at 20 km from France, in the Basque Country.

The iconic La Concha Bay which so fascinated royalty at the beginning of last century, an innovative gastronomy awarded with 18 Michelín Stars that has gained fame the world over, a millenarian and unique Basque culture still alive, together with safety and elegance, make San Sebastian a great destination for professional events.

With a concentration of 22 researchers per 1.000 inhabitants and significant investment in R&D, San Sebastian is among the 200 capitals of the world with the highest scientific production according to Nature Magazine (4th position in Spain). The city annually hosts professional events for the exchange of knowledge, 60% of which are international.

PASSION FOR KNOWLEDGE: One of the 200 main scientific cities in the world, with 22 researchers per 1,000 inhabitants, it is a destination capable of attracting talent of the highest level: two Nobel Laureates joined the University of the Basque Country (UPV/EHU) in 2020.

GASTRONOMY, OUR SIGN OF IDENTITY: A pioneering project worldwide that brings gastronomy to the academic field with the creation of the first Faculty of Gastronomy in Spain and the first doctorate in the world at the Basque Culinary Center (BCC). Multiple traditional gastronomic experiences: pintxo, sagardotegi, txakolindegi, txoko, etc.

WE SPEAK THE OLDEST LANGUAGE IN EUROPE: Basque is the language around which the Basques created their own cultural universe that endures and celebrates deep-rooted traditions and festivals: regattas, Basque pelota, Jai Alai, harrijasotzaileak, etc.

SILENCE, WE´RE SHOOTING: San Sebastian is known for its long-standing international festivals and clear references in its genre such as the San Sebastian International Film Festival (68 editions), Jazzaldia (55 editions) and the Musical Fortnight (81 editions).

WE THINK GREEN: Local initiatives in favor of sustainable displacement (Mubil-electromobility center), the preservation of natural resources (Cristina-Enea Foundation), leading congresses such as Change the Change (2019), the certification of sustainable events (Erronka Garbia).

MORE THAN 30 YEARS IN THE MICE SECTOR: More than 60% of the conferences in San Sebastian are international, we have more than 300 partners, we bring together more than 70 ambassadors and we are a member of the leading associations in the sector: ICCA and SCB.

Capacity of the largest meeting room 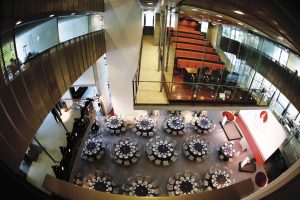